What does aquathlon mean? What distance is aquathlon? Read on to find out everything you need to know and how to enter the iconic London Aquathlon.

What Is An Aquathlon? Everything You Need To Know About Aquathlon In 2022 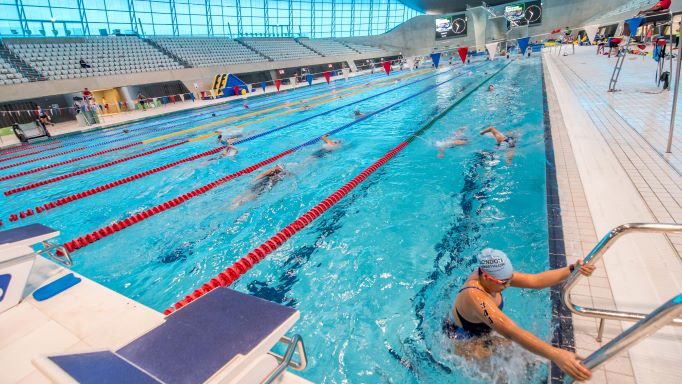 A multisport event is any event like triathlon or duathlon that involves more than one discipline. You probably know about triathlon thanks to the Olympics and perhaps you've heard of duathlon, but maybe you have no idea what an aquathlon is? Read on to find out everything you need to know about aquathlon.

What does aquathlon mean?

An aquathlon is a multisport race that consists of running and swimming. It is considered accessible and simple because it does not involve external hardware such as a bike, which is required for a triathlon. The format for aquathlon is run - swim - run, with different distances depending on which event you have entered. The swim is the focus, so the swim distance is comparably longer and harder than the runs. However, some aquathlon events are just a swim followed by a run, and the swim is comparably shorter and easier than the run, so that the event is more accessible to everyday athletes.

What distance is aquathlon?

As with other multisport events such as triathlon, aquathlon has varying distances so there is something for everyone. The official distances for the annual ITU Aquathlon World Championships are a 2.5km run, 1km swim, and 2.5km run. A typical super sprint aquathlon has a 400m swim followed by a 5km run.

What do you wear for an aquathlon?

Many aquathlons are pool-based and don't use open water. This means you can wear what you would typically wear to go swimming - a swimming costume, bathing suit, or jammers for men. Much like triathlon, aquathlon has a transition area where you can transition from swim to run. This means you can leave your swim kit such as goggles and swim cap before you head out for the run.

What is the difference between aquathlon and triathlon?

The main difference between aquathlon and triathlon is that triathlon features a bike leg while aquathlon does not. Both feature a swim and a run. Aquathlons are most similar to triathlons, with the key difference being the lack of a cycle leg. The bike adds extra complexity for both the athletes and race organisers. Bikes must be transported to the venue, which can be logistically onerous for the athletes, especially for international events. The race director has to select a course that allows space for the bike leg, possibly including road closures. They can be run informally in local lakes.

If you're a runner who has considered trying multisport, this aquathlon is the perfect opportunity to give it a go, and why not at the Olympic Park and Aquatics Centre, home of the 2012 Games!

We've created this event for those who may be new to multi-sport events. From great changing facilities to how to manage a perfect poolside transition, you'll be looked after and carefully briefed to take on the challenge with confidence.

With a super-sprint 400m swim (just 8 lengths of the Olympic pool) followed by a fast 5K run course around the iconic sights of the Queen Elizabeth Olympic Park, you'll find the athletic challenge just enough for a perfect first-time multisport experience.

Places are strictly limited to ensure you have a comfortable swim, and fellow competitors around you on the run course to keep you going.

Participants, grouped together in waves (8:00am, 8:40am, 9:20am) and released in 15-second intervals, will be allocated an exact swim start time between 8:00am and 9:40am - communicated in the week leading up to the event, together with a recommended arrival time at least 30 minutes prior to their start wave.

Faster swimmers will begin first within each wave - determined by the estimated 400m swim time provided during registration to minimise congestion – but all participants will be randomly allocated to one of the three waves.

As an official British Triathlon permit-holding event, you'll benefit from a professional experience that meets all the requirements of the sport and introduces you to the technicalities and rules to help you get the most out of your experience.